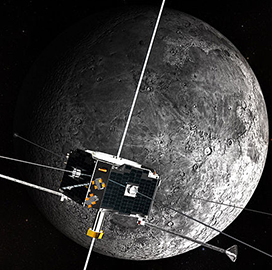 The in-situ resource utilization effort covers the collection of lunar regolith that will fall under NASA's ownership in line with efforts to support future missions to the moon and Mars, the agency said Friday.

Masten intends to send a lander to the moon's south pole in 2023 for a proposed allocation worth $15K. Lunar Outpost also plans to send its lander to the same region for $1K in allocations.

Ispace Japan plans to deliver its lander to the northeastern near side of the moon in 2022, while the company's European arm looks to send its platform to the lunar south pole a year later. Both businesses will receive $5K each for sample collection work.

NASA intends to issue 10 percent of contractor payments upon award, another 10 percent following the launch, and the remaining 80 percent once their respective missions have concluded.

The agency released the solicitation for the ISRU effort in September and implemented a “low-priced, technically acceptable“ process to select contractors.