Banazadeh told attendees at the TC Sessions: Space 2020 event that while the U.S. improved its regulation of the space sector over the past year, the nation still has to take the lead in encouraging companies to go beyond the commercial market and provide next-generation technologies to the government.

“When we started the company, we saw the immediate opportunity in commercial. And as we dug a little deeper and made some progress, we realized that the commercial market is still not as mature as we had hoped it to be,“ he said.

Melanie Stricklan, founder and chief strategy officer of Slingshot Aerospace, said at the same event that the company is focused on situational awareness technologies considering that data is the government“™s “most important asset“.

Peter Platzer, CEO of Spire Global, noted that the space sector is seeing a dynamic period with more benefits than challenges.

“I think the global space ecosystem is one that remains heavily siloed," he said. “It“™s not like the digital transformations that have happened in Silicon Valley.“ 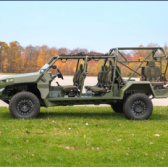