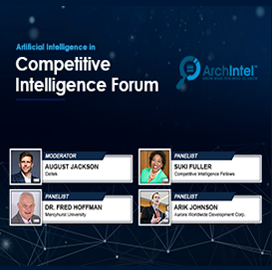 The current state and future potential of emerging technologies were the focal points of an expert panel at ArchIntel's AI in Competitive Intelligence Virtual Event. The panelists were Suki Fuller of The Council of Competitive Intelligence Fellows; Fred Hoffman of Mercyhurst University; and Arik Johnson of Aurora Worldwide Development Corp. The moderator was August Jackson, senior director of market and competitive intelligence at Deltek.

Hoffman, interim chairman and assistant professor of intelligence studies at Mercyhurst University, said during the panel discussion that gathering, analyzing and using competitor-, customer- and market-related information to contribute to competitive business advantage will continue to be influenced by AI.

He added that such technology has enabled companies to look into their respective businesses and identify areas for improvement, listing other ways how competitive intelligence can be transformed by technology.

Johnson, chairman of Aurora WDC, told the forum he believes AI cannot replace a human analyst's creativity. "An analyst is a form of art, they have aesthetic value… Wherever the senses are titillated art is present," he added.

Fuller, following on Johnson's comments, noted that AI has helped analysts become more aware of their biases and their sources of information. She talked about what a CI practitioner has to do to ensure the collected data's accuracy and relevance to future applications.

Panelists also discussed misconceptions surrounding AI and where it stands within competitive intelligence.

"People think we're at the point where AI can be seamlessly integrated into competitive intelligence. In reality, we are only at the beginning of automation," Johnson said.

Ethical dilemmas from using AI to conduct competitive intelligence and limitations of AI were also tackled during the Oct. 22 event.

The AI in CI forum was sponsored by Deltek and was the first in a series of events ArchIntel plans to host to help businesses remain competitive amid the shifting market environment. 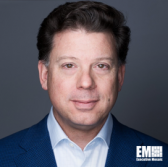 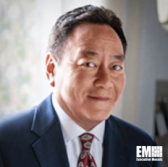