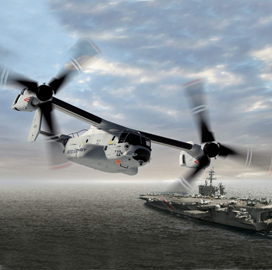 A partnership between Boeing and Textron's Bell subsidiary delivered a new tiltrotor aircraft for operational use by the U.S. Navy's Fleet Logistics Multi-Mission Squadron 30.

Bell Boeing completed CMV-22B delivery to Naval Air Station North Island in San Diego after the joint venture provided two units of the Osprey variant in February and May as part of a developmental testing phase, Textron said Wednesday.

The CMV-22B, which replaces the branch's C-2A Greyhound transport aircraft, has a cargo capacity of up to 6K pounds and combines a helicopter's vertical takeoff, hover and landing features with a turboprop aircraft's speed and range performance.

The new vehicle features updated forward sponson tanks and an additional two 60-gallon tanks that provide an operating range of more than 1,150 nautical miles. It can support roll-on/roll-off delivery efforts for F135 engine power modules, according to Textron. 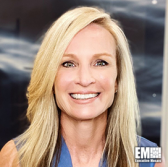